Dollar high might be in – or close to in? PM bottom in? 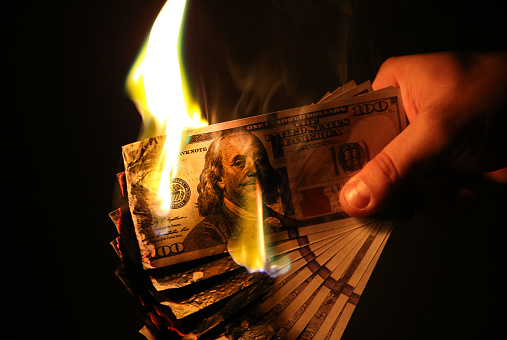 I listen to a LOT of people on YouTube. I think the one, to me, who has been pretty accurate with a mix of charts and macros is David Brady. Now, any prognosticator out there has hits and misses. The first thing any of you will think or write here is when he was wrong. I see the comments on these guys. They are brutal. I look at a lot of these guys as managing billions of dollars and they get it right a lot more than they get it wrong and manage their risk properly – which separates them from the noobs and amateurs like myself.

They could go back to a guy with $50m and tell them that they made them 26% in a year and that guy would be beyond happy. You and I, as amateurs, see these wild moves up on everything and are pissed our entire portfolio is not up 100% every year. I DID get lucky last year with riding everything up, then pulling the rip cord on half of my stuff thinking there was another crash imminent in July. I ended 2020 up about 100% in 10 months of trading/investing, but quickly was baptized the beginning of this year and have been drowning since. So shit isn’t as easy when you have just about everything invested in PMs and you are in a 16 month consolidation. I was able to make some money on my monthly silver beat down trades as I documented here a bunch of times, but man – I got killed on GDX options not once, but twice, and am about to get crushed in SILJ options for 1/21/2022 unless silver moonshots. IF silver is up there at $50, then I consider retirement in January lol.

I bring up Brady because he has the dollar going to somewhere like 96ish. I just listened to Vermeulen and he said 94.6 may be the high, and if not, some pain might be felt in PMs.

What made me write this? I interacted with Jonathan Mergot on Twitter and he had made mention he called the bottom in early October and he seems to state the bottom may be in. However, in my interactions, someone posted a “spider chart” that I took a look at. I searched for a little this morning (today it wasn’t the kid, it was the dog barking at 3:20) and I couldn’t find much on them. Big picture here is this chart with silver seems to deal with some arcs.

I didn’t know what the hell I was looking at, so let’s blow this up a little. (He updated this chart this morning)

But what about that pesky dollar? Can I wait for the spider charts, or can I do one myself? Yeah, no, I can’t do one myself. Trading view doesn’t give me those cute spiders, so I’m SOL. One thing I did see was what looked to be like a ladybug, so no, not trying. Also, don’t know what the hell I’d do with it anyway, as there aren’t a lot of videos out there explaining these things.

In my chat with Patrick and Kevin, we did go over some arcs. Kevin’s dollar arc was much smaller than the one I drew, and I wanted to review what I had already done and update it.

Below is MY chart on the DXY for the weekly. Haven’t looked at this in awhile.

So with my chart, I have some trading zones I identified as a “range bound area”. I got this from Michael Oliver’s talking about silver to be making a “new base” if it hits the momentum numbers. These were reported to me as a weekly close of $23.50, but in a recent interview I saw of him on WallStreetSilver, he mentioned $25.30 I believe, so I think someone transposed that as it was given to me. Point is, once silver gets above $30, it will have a new trading of of $30 to something. Maybe $35?

This is what the structures look like that I have for silver. Silver now kissed $30 a few times, and I think if you see that spider chart above and how many times it hit $30, AND the macro environment, AND the supply chain woes, it’s quite possible this next run up takes it over $30 for a long time ahead.

So you can see “we are here” with that trading channel from $22 to $30 since last June or so. You see how we broke out of the yellow channel before it? Yeah.

When you are looking at these arc structures, you can clearly see a down sloping channel, a basing channel, and an up sloping channel. However, there are periods where moves appear to be digested – where weekly and monthly RSI can cool, the market completely digests the move – and THEN it can make its next level move.

On Tom’s interview I did last week for Palisades, I talked about this being a 40 year cup and handle in the making, then I saw someone else discuss this a few days after me. I brought this up on Patrick and Kevin’s show as well. Let’s back this up….

Gold is forming a new cup and handle – with the cup from 2011 to 2020, and the handle forming now. Silver never formed its handle. In my opinion.

But for silver and gold to really move, now, it seems we need to have the dollar play ball. They can move WITH the dollar, but that hasn’t happened for quite some time. Let’s look at the DXY arc closer.

The red channel we are in….sonofabitch, the top of this is about 94.6, where Vermeulen sees the DXY going to, and possibly failing. This chart here with the dotted line shows the BALLPARK of what must happen with the DXY for 96 to be hit. This means it needs another stronger move up yet with jet fuel to burn the RSI over 70, then the rollover starts – perhaps then taking you down to 89.5 or lower. 89.5 happens to be the bottom of this channel, and below that, is the abyss for the dollar – and Brady’s 96 then has us with a lower dollar in 2022.

Mergot seems to think in June 2022 when rate hikes start, this will be bad for PMs.

While this seems to make sense, you have others than seeming to think these rate hikes won’t really hurt gold, as they will be because of inflation rather than a good economy, and perhaps by then the algos will mean that to buy gold. I think it’s also possible that many say gold is very forward looking, and the rate hike could be baked in this cake already. Jordan Roy Byrne this week essentially said we have $1900-$2000 sometime by end of 2022. How can this be if gold takes a hit on rate hikes in 2022?

Now, what if Vermeulen is looking at this 94.6 level that I just happen to be tracking as well?

The one issue I’d potentially have with this model is it isn’t giving a touch to the arc. It doesn’t have to, obviously, but the time here is crucial to the arc. It might seem to me like we stay in this red box until a touch happens. It could look like this….

I have problems with this also – but from a macro level. You get the 94.6 touch, then the rally Vermeulen sees in perhaps the first 2 months of the year, but as the day gets closer with the anticipated rate hikes, the DXY would strengthen. But once the touch to the arc is made, then what?

To me, all of the above screams Vermeulen for the win. While the charts and Brady may be correct with a 96 and arc touch, this could also happen like this…

In any scenario you see, you see a little room up to possibly 94.6 to touch the channel top, rollover – and this is when PMs move up. The last two days, we saw PMs get crushed and miners napping through this. Remember how people say miners lead the metals? To me, that was a MAJOR sign the PM metal PRICE INFORMATION was incorrect. NFP tomorrow may push down the final flush of PMs, then start a reversal. Biden to announce decision soon.

My guess? Dovish nominee with Yellen as Sec of Treasury has the money printing go brrrrr memes look like nothing. The dove nominated will be the person who takes the dollar sub 89.5 inside of 12 months.

This is where the charts meet up with the macros, I believe. If you plot out news and macro events, you can sort of see how this price information records these events. My silver beat down chart shows how price information is being directed by an invisible hand monthly. People want to think price action alone does these things. They don’t. They can perhaps show you how some macro events can unfold.

Other times, price action may drive sideways through your pretty arc and tell you to piss off.

I posted how my account was down like 2% Tuesday and was jumped on. Meaning, gold and silver had the baby seal clubbing again, and RELATIVELY SPEAKING, my miners barely moved. Was expecting a massive sell off. I was in a lot of cash and had stink bids up and down the board. Nothing. Yesterday – silver down $.60 and gold down $20. I sign in to etrade and I’m green on the day?? WTF?

I then look at the indexes, and….sonofabitch – GDX and SILJ BOTH touched the bottom rails I had for them.

SILJ touched – I didn’t re-draw this, this was my bottom rail I was tracking.

What does this tell me? Anyone who wanted to really sell miners, have sold. We could see metals move a little yet, but I think the miners may be done moving. Why? To me, many have already sold, but I think with Q3 results looking amazing, along with a dove probably coming in to the Fed, it screams much higher metals prices ahead.

I haven’t listened to Gary Wagner yet on Kitco. About to. Jordan Roy Byrne seems to be the most bearish of them all, but he seems to be locked into charts 100% and not focusing on macros. He could end up being right for all we know and be the lone voice in the shadows. He is on the record though.

With PM miners, I saw a lot of my newsletter guys do some tax loss selling on juniors over the summer, so I did as well. I think my net gain now on my account for the year is like $200. I am hoping for some major good stuff ahead, and then sell in January/February so I don’t have to deal with getting all kinds of gains ahead. Medgold is about to be sold by me for tax loss selling, and this will be offset with some gains I may have coming up in uranium.

Could the bottom for miners be in? I am hopeful, but it seems some of the people who are smarter than me think we need months of flogging an utter and complete capitulation in order for metals to move $5. I’m not of that school. Why? We can all see the fuck show burning down around us and gold is kind of the obvious choice. Don’t overthink it.