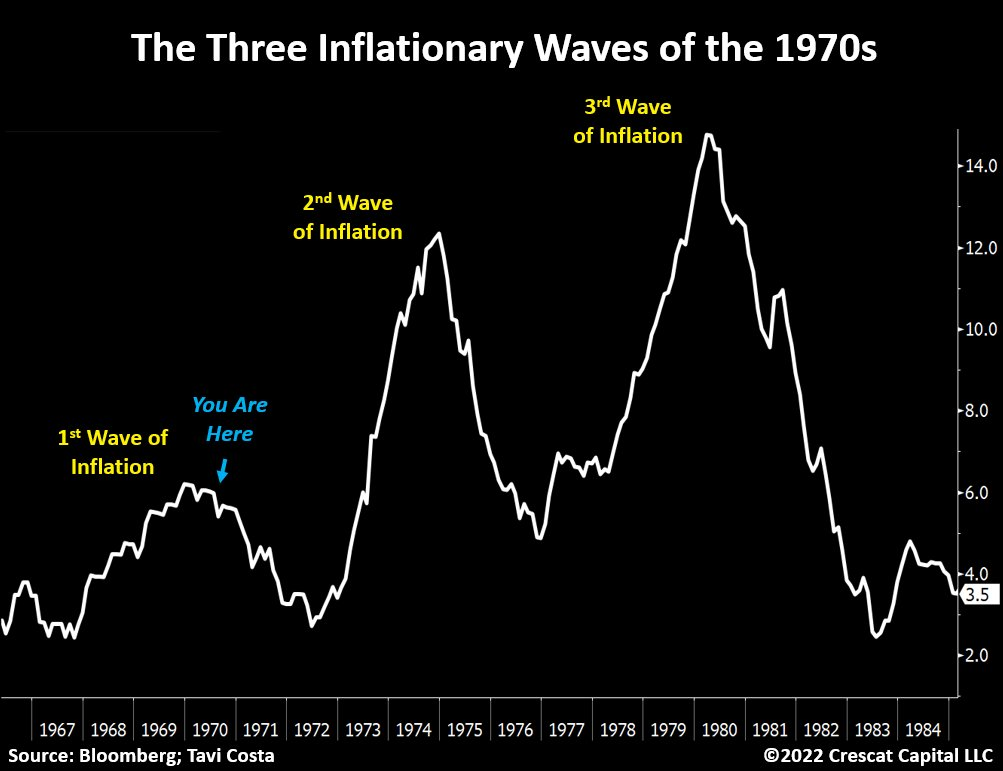 I wanted to share some charts I saw recently, and link some discussions which I feel are very relevant to where we are, and where this is going.

Currently, these charts signal my mood.

And then Tavi’s chart which essentially is putting to paper what many have seen as the cyclical waves that can lead to much higher gold/silver prices over the next 10 years.

To me, this is not the end of inflation – it is merely now going over the first hump. What is happening NOW I believe are things that will play out for the NEXT hump…

What is happening right now is DEMAND DESTRUCTION. That is, rates are now so high that any plans of expansion, buying a house, buying a car – are FREEZING. Think about anyone you knew that has become a realtor in the last year. I feel terrible for them, as no one is really planning to buy a house in this market.

But with 1 and 2 above, you can see unemployment going to creep up. This is a lagging indicator, and with this, you can imagine all of the cars/trucks that were waiting on chips are now coming on to showroom floors, but the buyers are now all gone. Housing stops means the mortgage and construction industries go on ice. Sure, you can have union wages start to go up, but maybe 10,000 of those union jobs are then cut. This ultimately will lead to wage deflation in the form of higher unemployment.

So the trough may be when we hit like 7% unemployment? 8%? 10%? No one knows when the Fed will realize they went too far, again, this time in the other direction. This will have to first, stop rate hikes – but depending how bad of a shit storm they caused, they will have to start cutting.

But I want you to think about what happens with 7-10% unemployment? Think about all of the people (70%) or so, that are paycheck to paycheck. They may have to sell stocks/401ks to get cash. They may have to sell their homes. This can put lots of supply of everything back on the market. However, with dire financial conditions, there are no buyers at these high rates.

This is the point where rates start to cut. When you see this, you may still have 6-12 months of lagging data, but it will signal the beginning of the next start up as rates get lower, with housing prices coming down, perhaps you finance at 6.5% with the house at 35% off, with the plans to refi if it gets sub 3% again. Perhaps you buy a car when the sticker price is knocked down 20%? This could then have a lukewarm effect on re-starting the economy…

But when you go to crank up production again, your usual supply chains either aren’t selling to you, or they have such low inventories that you have to bid them up to get things. I believe it is at this point where supply chain issues rear their ugly heads and we need to start bringing a lot of stuff back here. This is going to jack up costs – and to finance all of this stuff, rates once again have to come down to “restart the economy”. This time, however, more things are being made here, which drives up the prices more.

I just listened to a Jim Rickards interview – I was very much in disagreement with him last year about inflation. But he points to how this time around, there may be demand-pull inflation where everyone sees the lower prices from inflation, and buys to try and avoid the prices from rising. This is a self-fulfilling prophecy. And – this is perhaps the second hump coming in 2024-2025

Yesterday, as markets opened 750 points higher, I was driving to work like….”this makes no sense”. To me, with the CPI going down, it was signaling they were beating inflation down, but HOW? They literally destroyed demand for everything. How do you think that’s going to show up in 4th qtr earnings?

Turns out, it was a mirage…I am a broken clock, correct twice a day, but occasionally I nail things.

I thought I made a comment on someone else’s post, but that may have been deleted. The concept was – “I don’t understand why gold is higher with the markets this high” – at which, given the mirage sentiment, I had written something like, “maybe gold smells this isn’t correct and is front running the risk off coming”.

So we are now at the chapter of the game where I feel there is a STRONG possibility that we start to see gold and silver diverge from the general markets. I wrote a post where I was more or less trying to observe what gloom and doom is out there – not to project it, but to try and see what bullish case there is for stocks right now, and it’s hard to find it. Take a look at the thread to see where I think this leads…

IF true, you have to see a chart I did a long time ago, which showed that when the pivot happens, this is good for gold and silver. Not so good for everything else. Why? Because if a pivot is happening, it means the economy is shit and falling apart. I believe gold and silver will start to sniff out this pivot coming and act very much as risk off assets here. That is, you can see the markets going down with gold and silver going up. I saw this right before the 2020 crash – but the QE there was on steroids – lots of the pros warned to get out in July 2020 from gold. I got out of half, for different reasons, and pocketed a small fortune. But their point was everything ran hot, and they seemed to feel perhaps it was risk on time.

If you can see this closely, when they did the Fed Funds reversal in 2019, gold soared. DXY went down. 10yr went down. Stocks sideways and then down.

To me, I’ll be looking to hold gold/silver until rates go down near damn zero again. And they probably will. You can see gold then sort of had a blow off top as rates were near zero, then that money seemed to rotate into stocks/housing, etc.

With the markets going to look like shit, and unemployment about to creep up, I think gold has some lasting power here through mid 2023, perhaps most of the year as the Fed may slow walk rate cuts. Gold may see rates going up 50 basis points today, 25 in March, but also know that these economic numbers are shit and this is forecasting a freeze in rate hikes and an eventual pivot. Gold seemed to go up a few months before the pivot last time, perhaps anticipating.

As we see rates run lower, in theory, economic activity should pick back up. But it could take some time. Probably mid 2023 I can expect my miners to have damn near tops for this cycle. We could see rates at near zero for 1-2 years then. The next time, I’m out of gold/silver miners for a 0% run, as this has all the makings of another risk on event, and another ride up the roller coaster. I will ALWAYS have core silver physical holdings, but I can see a path to $2500 gold and $50 silver by fall 2023, perhaps end of 2023 as rates decline. WHEN they hit zero, or near zero, this could potentially have another blow off top as FOMO hits the metals, just as you and I start to sell.

Don’t listen to me. I’m a broken clock right twice a day. But damn, looks like a nice setup!

For me, I am potentially looking to have my miners run higher as diesel prices come down. Remember, these higher diesel prices crushed profits, and with oil at 50% of its cost from 8 months ago, it’s possible with $2000 gold we start to see real profits and rotation into the sector.

Immediate short term? I’m a little worried about a cliff drop. When these guys who bet at the casino and use HFT realize that economic numbers really are shit, this could lead to a 1,000 point down day or 5. I’m out of everything excess until this occurs – where I still have my core holdings of FSM and about 15 other miners (these are in far smaller positions, where I believe FSM is now damn near 70% of my portfolio again of items I hold. I’m in about 60% cash at the moment).

So can I miss the move? Possibly. I’d get on after a pull back, but I think we are due for one with January’s economic news, and then it might be time to really lean in. All of these things change hourly, daily, weekly – based on current macro events, so if you read this thing after Christmas, you may already have outdated information.

Mostly, I feel the massive buying of gold by central banks, along with the BRICS system being stood up to rival SWIFT and the dollar can also lead to big buying of gold by sizable players. Silver’s physical deficit structure along with a risk off that could see a buying frenzy into silver could take it to $50 in 2023.

But this is all the trough of hump 1. Going into hump 2. What is then interesting is the downside of hump 2, going into trough 2. THIS might be where you are thinking $3000-$5000 gold and $100+ silver past 2026-2027. I can’t see that in 2023, as much as I’d like to, because they may have to aggressively reduce rates if unemployment is on a runaway train. If unemployment is steadily increasing, I can see them slow walking cuts. But if you wake up to a jobs report with 1m unemployment claims in the last month, that might accelerate the cuts in rates and gold’s move to a FOMO peak. The danger is getting out too early, before the blow off top. Well, these guys here all talk about buying and selling in tranches. Take their advice, not mine.

One thought on “Silver Shorts – The inflation roller coaster”