The trainer – and learning to swim 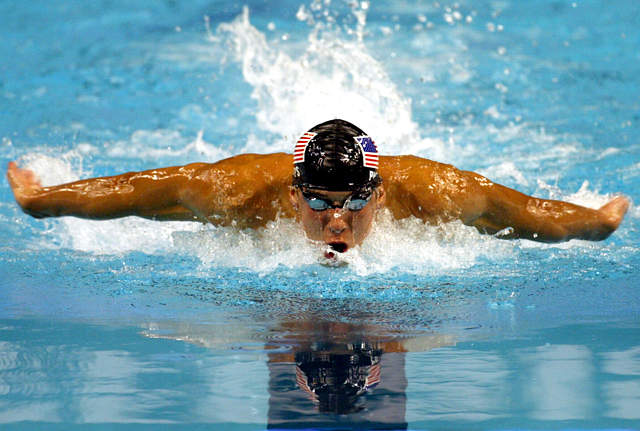 I have a long, long history in the weight room, on the practice field, and in the gym.  I love sports and competition.  Despite how well I advanced in baseball, tennis, and even lifting weights at times, I never had a professional trainer.

The first time I lifted seriously, I think I was 13 and would go to our local Y.  There were dudes there that played on the local HS football team, and me and my buddy would try and mimic what they were doing.  This was the late 1980’s, and there was no internet.  No way, no how I could afford a trainer.  So we just lifted.  Hours upon hours benching, doing squats, and doing leg presses.  All done without any professional guidance.  You start picking up more and more tips, some perhaps good, some perhaps horrible.  It’s not that I was against a trainer, I just never felt a need for it.

Well, I still have some pain in my foot and lower back.  It’s not as bad as a few weeks ago, but what this has done was humble me and want me to start my fitness training from the ground up.  I am proud of being able to run and bike so much, but it seems like the running took quite a toll on my foot and eventually my back.

I joined a local Jewish Community Center.  It’s like a  YMCA, but for a different religion.  I’m atheist, and the center is open to all backgrounds, so I looked into it.  One big thing I was looking for was a big pool with access so I could do some exercise without high impact to me.  The JCC has a ton of trainers, and by joining up, you get three free lessons with a trainer.  I have had this deal before long ago at Bally Fitness and LA Fitness, but never took anyone up on it.  This time….I did.

So I met with “Jane” and she did a background on me.  Understood my health history, eating habits, athletic history.  One cool thing is they have a really fancy scale there.  Take your shoes and socks off, and the thing reads out your body fat%.  Mine wasn’t good, but it would have been far worse 6 months ago.  Turns out my basal metabolic rate (BMR) is 2850, so that’s what I need to keep the lights on in the factory.  She wanted me to hit that number and we’ll create a deficit in the gym.

Doing this over Thanksgiving and my birthday is no small feat.  I stepped on that scale the day after Thanksgiving and yeah – lots of salt and temporary weight, so my numbers are going to look good when I step on it next.  OR – perhaps we have to adjust the caloric intake.

One good thing that has come out of this was that I was also asking for corrections to my form.  In case I was doing an exercise wrong, I was asking to ensure I was doing it right to help protect my back.  Turns out I was doing a rope-tricep push wrong.  The new way of doing it was quite efficient and gave a nice burn!

Additionally, she wanted me to start trying the elliptical.  Never did it before.  For any of you that have never tried it, I say it’s definitely worth a try.  Smooth motion, so you don’t have to worry about some heavy impact on your feet.  I did it for 10 mins yesterday, but I had the heart rate set too high and it became a bit on the challenging side.

So I had an above ground pool at my house growing up and loved being in the water.  But I never had lessons on this, either.  About 8 years ago, I did something called an “indoor triathlon” and my goal was to not finish last.  I finished SECOND!!….to last. lol.  Anyway, I had done a lot of running and biking in my life, and I figured I was good on the swimming.  WRONG…TRY AGAIN.  I decided in that event I was going to do a warm up lap.  That was stupid.  After one lap down and back, I was exhausted, and the event hadn’t even started yet.  Well….at the JCC the last couple of weeks, I have been swimming down one way, taking a 30 second to a minute break, then swimming back.

Turns out I know enough about swimming not to drown for 5 minutes.

As I was about to leave yesterday, a girl got in the lane side and was doing freestyle swimming for what seemed to be 30 minutes straight at a good clip.  Up until that moment, I had seen others hacking away like me in the pool.  The smooth motion in which she swam, she sort of glided through the water.  Mine was some sort of violent massacre against water molecules.  So I started watching some swimming videos last night, and just realized I didn’t know what I didn’t know.  Apparently with freestyle, you’re supposed to be looking at the bottom of the pool.  I was not exactly doing that.  Anyway…looks like I’m going to get some goggles and have to work on my form.

One last note with swimming – I haven’t watched a ton of Olympics in my life.  My wife got me watching that this past year, and I couldn’t believe the physiques of these dudes.  You have the stories of Phelps having 12,000 calories a day, which I kinda sorta understand now.  I was in the pool for about an hour yesterday, and did maybe 15 mins of laps.  The numbers on my MyFitnessPal for 15 mins of laps with light effort was staggering.  I could not imagine 15 mins of hard effort?  Or 30 mins of hard effort?

Suddenly, I was enamored with the revelation of being able to bike, lift properly, hit the elliptical, and become a pool rat.  My body today is pretty sore all over…still from the chest exercises and leg exercises from Friday along with the elliptical and pool from yesterday.

As down as I was from my injuries the last 3 weeks or so, I’m now hopeful again in my recovery!

Yes…I want to run a 5k late next summer, but I think I want to carve off another 50-75 pounds prior to getting back to that sport.  To the pool!!