What terrifies me about silver at the moment 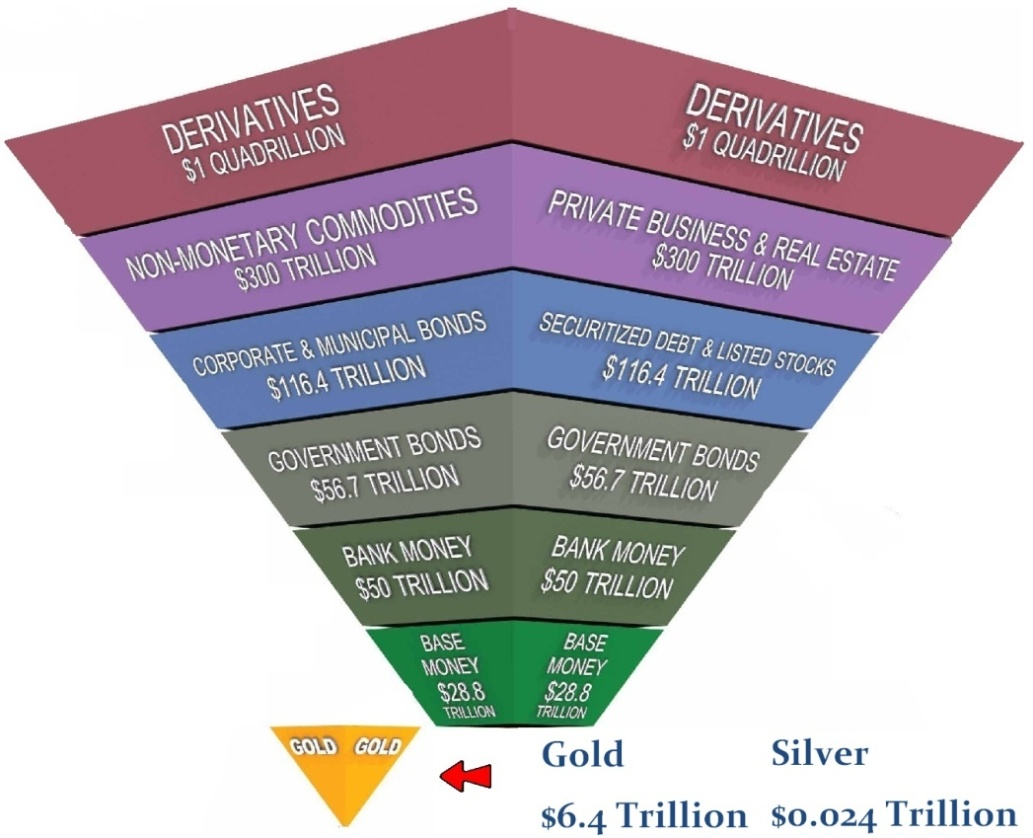 I am not a nickel expert, but I believe the “type 1” or the like is used for EVs. Last week, we saw nickel moon in a day. Lithium has gone up 5-10x depending on what chart you look at. Lithium is plentiful in the earth’s crust, it’s just the mining capacity currently may not be keeping up with EV demand. Nickel got the bump due to the supply chains with the Russians which might be cut off.

If you are a commodities guy, you are ecstatic in a sense that the markets are seeing the frail supply chains, the bans on exports, and the tightness that is sure to hit your favorite commodity soon.

I am a silver whack job. I love gold, but I have intently studied silver for 2.5 years now. Everything from uses, to supplies, to futures, to what vaults hold what – I consider myself on the way to being a silver expert. Not there yet.

But the problem I’m now fully starting to understand is that those in power aren’t simply going to allow this change to happen. It will need to be pried away from them. What do I mean?

When I first got involved with this, stuff, I used to listen a little to the crazy silver guy talk about “fiat ponzi scheme” every 10 seconds and he introduced me to Exter’s pyramid. In my early times in doing this, I called it “Exeter’s pyramid” as I grew up next to a town called Exeter, PA. Eventually, I corrected my mistake when I realized it was named after a someone, and not a somewhere. These are the growing pains of getting involved with new ventures.

Anyway, what many of us realize who have looked at this is that the way to essentially get to gold as money (and silver) would require things above it to start breaking down. We are starting to see evidence of all of these things start to quake.

6. Base money – I believe the issue here is that people will have dollars in their hands, at some point, but what worth is it? Remember, a highly inflationary scenario has the value of this paper currency eroding by the day.

7. Gold and silver – This is the rebuild of what I believe the East is doing now. The West wants to introduce digital currencies and move from a paper fiat system to a digital fiat system. At issue is, it seemed the overlords wanted to do this in the next 5 years and Russia/China and the BRICS+17 countries seem to be accelerating that as we speak.

The implications of all of the above on silver are this – most of what we see with silver prices today are the derivatives. We see a paper futures market trade 500m oz in a day with paper contracts on a sham market. Sorry, worldwide production is 850m oz. Why is there 200-500m oz traded every day? Because they found ways with computers, algos, and AI to extract money from you to feed them. The market DOES find efficiencies – but at the expense of a producer.

Imagine you are First Majestic, and you see the futures price at $24. Perhaps you are able to keep the lights on for this, but between exploration, debt, and CAPEX, it’s a real struggle to be profitable. But now imagine you are a base metals producer making lead and your silver byproduct price is $24. You care about the price of lead, and you produce a good amount of silver, but it makes literally no difference to you if it is $24 or $18.

The STRUCTURAL issue is that the base metal producers may produce 80-85% of all of the silver, with the primary silver producers at 15-20% – at best. IF they all went out of business, tomorrow, you would have a major deficit. As is, I felt we have had a MAJOR deficit the last 2 years. The Silver Institute brings up numbers which look to be almost a perfect supply/demand balance. But I ask you this. IF there was such a great balance, how could BoA leas $18b in silver (800m oz) and Citi lease $9b in silver (400m oz) and sell short into this market over the last 12-24 months and not grind the price of silver to dust? Answer – because all of that silver that has been put out there to buy, has been sold.

I believe then, IF Ted Butler is correct and these banks have sold these piles short, then perhaps we just created a 1.2b oz short between these banks – and the true demand was not reported accurately by the Silver Institute. Apparently, the Silver Institute is derived from the Silver Users’ Association – which is the users of silver essentially gaslighting producers into this perfect harmony of supply and demand. Keith Neumeyer is having none of this, and called bullshit on the SI numbers. Because of how they have been grinding the primary producers to dust, all of these primary producers have had to pick up a side hustle with gold to keep the lights on.

Well, structurally, silver is about ready to explode.

See, we are now at that stage where people are taking their ball and going home. Meaning – this paper charade is about to collapse. But we have just seen the playbook on how this collapses. IF the BoA/Citi is lit up, they will simply stop trading, reverse the transaction, and go “bid only” to reduce the price.

This, to me, is horrifying. It is also the playbook they used to defeat silver in 1980. If you look around the commodity spectrum right now, you have a lot of these commodities with supply chains from Russia, Ukraine, and China.

Let me put this another way so you can understand. The West for 50 years have created a paper scheme where we print little green pieces of paper to infinity, then we send these little green pieces of paper all over the world to exchange these for real, tangible goods. And, over the course of that time, the Western banks makes billions upon billions in price rigging schemes to crush the prices of these commodities – so the producer nations than cannot rise above the rates of inflation and get ahead.

What if these producer NATIONS said “enough”. We saw a few years ago the Chinese stand up an exchange. India is now standing one up. Last year one got stood up in the middle east and the LBMA criticized that they would be sourcing “conflict gold”.

I can tell you what I just saw with our sanctions. I saw us just show the world we will strip them of paper currency value in seconds if they do not comply with our agenda. But the counter to this is, these countries are the producers of the goods we send little green slips of paper for. All they have to do is to make physical exchanges, and tell the people you need to pay in rubles, rupees, etc to get your goods.

My main issue with the development above is that we will be ecstatic in the time this year these shorts are baptized and price continues to rise. But as that euphoria hits – just at that moment, I believe the powers that be that run these exchanges will step in and once again – favor the bankers. The producers of these metals, whose stocks just soared on the promises of Free Cash Flow to eternity, were then mugged at gunpoint.

I believe the nickel market was the dry run. And with this, the LME may be facing 5 years of lawsuits. The problem here is, can you just not participate? If so, you still have people selling into this – further driving down prices now into a market that is not functioning because buyers choose not to participate.

The breakdown of markets is the endgame.

Once the absolute trust in markets go, so does the West. If you then want to sell gold, it may go through India, UAE, Shanghai and no longer the LME/CME price rigging. Meaning – the PRODUCERS may ultimately win, but the banks that hold all of these derivatives may collapse along the way.

Nickel is how this whole system fall apart within the year. Right now, we have all of these countries refusing to export commodities now due to supply shortages. Russian oil is being boycotted by many, but Germany cannot turn off the gas or risk freezing or depression, and India bought via rupees as discounts.

2022 is the beginning of the unraveling of the derivatives. While I have seen the OCC reports of the silver leases of 800m and 400m, I don’t know how much of these piles were sold short. I can tell you the day Russia invaded Ukraine is the day these banks may have started the path to become insolvent. Silver may break like nickel soon – and at issue here is if the silver market breaks the same way the nickel one did, what you then have is a potential mass distrust in markets. With the nickel situation, they can blame it on a single Chinese guy named “big shot”. But when this happens to lithium, steel, silver, lumber, copper, uranium – these will be dominoes falling, when this starts. We are seeing the popping of derivatives and bonds with the Evergrande – but worldwide the supply chains are shifting.

The “globalization” allowed the rigging of these markets. I believe 2022 may have a moon move in many things as these supply chains break down and the shorts all get baptized. But the question then is, one after another, are these shorts going to get back stopped by a rigged government? IF any fails, could it then topple dominoes where a failed bank needs to begin liquidation, pushing over more dominoes?

As much as I love the silver setup – my great pause here on the way to $100 is by means of which exchange is setting that price? And – the path from one exchange to the other, will it be seamless, or be bogged down for weeks/months where one exchange has silver go to $10 as the other change is standing up and rebuilding that derivative exchange to a physical exchange which could then take it to $100?

Buckle up. The nickel market just made me pucker a bit. That could hurt me with derivative call options. These may be unwound in this process too. If we are right about the long term, perhaps our biggest risk short term is a melt up in metals, followed by an exchange failure with sell only taking it down to dust – crushing our call options in this process. To mitigate this risk – perhaps I may sell a lot of my call options into this melt up and just hold the stocks long term, with no margin? Margin calls could also force miner prices into the ground.

So – I’m enthusiastic about silver and gold, but goddamn am I somewhat terrified how we get to the other side of this.

7 thoughts on “What terrifies me about silver at the moment”