I don’t think I’m that far removed from testing the limits of the universe.  How late can I stay up and drink and party?  How much pizza can I eat before I am smited by God?  How lazy can I be before my body stops working?  How many red bulls mixed with a bottle of vodka can I handle?  Can I drink the whole bottle of scotch in one night or two?

There’s a switch somewhere in my brain that shuts off calorie counting and most normal human thoughts regarding care of oneself at times.  Just….zero thought given to what is going into my body.  As I’ve gotten older, the consequences have become a lot more pronounced, to the point where I pretty much HAD to make a change.  Fatigue, terrible sleep, hacking cough from smoking, swelling, joint pain, headaches all the time – and someone expects me to exercise feeling like this kind of garbage?  Well….I got good news for many of you.  After roughly 6 weeks, I feel like a new human being.  Weight loss is happening, albeit slowly – but clothing are a lot looser, blood pressure is much lower, resting heart rate is lower, no breathing issues, sleeping well, little to no joint pain, no headaches.  I FEEL amazing, and I just want to tell everyone I know how good it feels….to be normal like the rest of you.

I’d say in my life maintenance was never a strong suit of mine.  I work on several modes…architecting, engineering, and problem resolution.  These are things I do by trade, and how my mind works.  You want me to build great IT systems…provide architecture for how things logically work….solve puzzles on how the pyramids were built.  AWESOME!  You want me to mow the lawn once a week forever, keep the house clean, tend to a garden….HOUSTON, WE HAVE A PROBLEM.  So – maintaining my body has always been a puzzle to me as well.  However, when I hear things like “allow yourself one cheat meal per week” – this goes into the register as a “rule” and thus I’m good with engineering a solution based on common rules.

Anyway – this particular blog is about supplements and some gear.  I’ve read a lot of articles over the years how supplements can be crap.  How multivitamins never work.  How the industry is not regulated.  However, I read some articles on MSN the other day and it hit home for me a little bit.  While I have adopted a “most awesome” new healthy eating lifestyle, it’s virtually impossible to get all of the nutrients you need.  Sometimes, supplements are needed.  Here’s some notes on some things that I jotted down the other day on some things you might want to look into.

With the supplements above, one has to understand that none of these are going to make me slim in a week.  None of the above will “bulk me up” in a month.  None of these alone will do much in a short period of time.  However – take this from someone who is a “expert” on dieting (with just about every diet) – often what happens to me is I get a month or two in, I’m tired and hungry all the time.  I get an injury or tweak something…or the pain in joints is overwhelming and I need to take a break for a few days or a week…and then I slide off.

People think you ‘give up’ because you are ‘weak’.  Often, there are hurricane forces against you, and a quick McDonald’s meal is going to be a band aid to help you in the short term.  The joint pain, fatigue, starvation….many of these effects take 2 months or so to get to such a place that you need to take a break.  You take a break for a week, and suddenly 10 pounds comes right back on you.  I’ve been there.

With what I’m doing now…it’s funny…yesterday I went to the vitamin shop after work and I felt hunger for maybe the second time in 6 weeks.  I kind of chuckled to myself.  It’s sooooo rare I’m ever really THAT hungry anymore.  That was a constant state of living under other “diets”.  Now, I simply just eat when I’m hungry.  I went home, had a bowl of oatmeal, then a few minutes later walked the dog and worked out. (dinner number 1)

With the above meal, this, to me, is super fuel for my workouts.  Half a cup of oatmeal, 1 cup of water, pinch of salt…add a lot of cinnamon, honey, chia seeds, blueberries.  AWESOME!  This comes in at:

I also took my “superfood” with creatine – 45-60 minutes before the workout.  That’s in the “greens+” bottle above.  I’ve taken that off and on for years, and one of the items I live by.  The other as shown in a picture above is the chromium piccolinate.  When I took that in high school is when I was eating mostly carbs and running a TON. 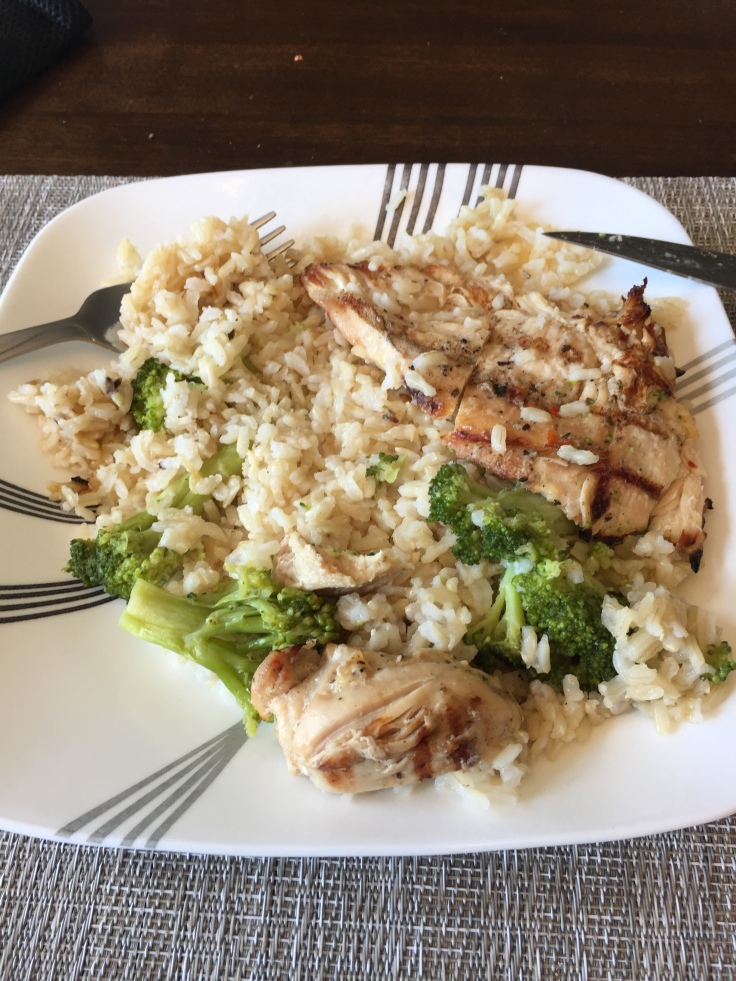 This is one of my prepped meals heated up.  This comes in around 500 calories.  Here’s the details:

This is essentially chicken, brown rice, and broccoli.  The chicken I made up with a form of honey/oil mixture which I took into account all of the macros for.  TASTY!  QUICK!  NUTRITIOUS!  Essentially, instead of “cooking for one”, I made up the 6 portions at one time, froze the other 5.  This allows me to not have to slave over the stove every night, but maybe once every 3-4 nights and make up batches of things.

One thing that really bothers people like me….is lack of a lot of places where you can actually buy clothing.  I’m telling you, anyone out there who is not severely overweight has NO IDEA about the troubles of finding clothing. I mean…There are 2 stores within 40 miles that carry anything in my size.  Now, this is from a guy who can bike 20 miles and run 2.5 miles in a day.  I’m not trapped in my bedroom and need the fire department come rescue me.  I only found the second store by accident because it re-opened for some reason and I drove by it last week.

So I was using the Under Armour app called “MyFitnessPal” and they had a shop link.  I find it ironic that the people who want to lose the most amount of weight – cannot buy legitimate fitness gear anywhere.  Go to Dick’s sporting goods and try and find bigger clothing, I dare you.  Often, you go to a Big and Tall store and you buy a pair of sweatpants that weigh like 3 pounds and feel heavy – then are made for someone TALL as well as FAT..so you then have sweatpants that run LONG.  Then you have cuts from people like, “just don’t be fat and you won’t have that problem”.  Right…..that’s what I’m trying to address honey.  Amazingly enough, I actually heard that line quite a few times in my life.  Death by a thousand paper cuts I suppose.  Anyway…moving along…Under Armour has a TON of stuff in larger sizes.  Could not believe it.  Got awesome shorts that were extremely lightweight.  Hoodie that fits great and will be great for running/walking as the temperature dips in the next few weeks.  The shirt I got ran a bit on the “tight” side as I’m not sure they got the memo that heavyset people don’t exactly want their shirts clinging to every nuanced curve of their body.  So I’m avoiding the shirts for now, although the one I got would be a nice undershirt under the hoodie.  Lastly…I also ordered running shoes through them.  They are also extremely lightweight – and far, far, far more comfortable than the Nike training shoes I got last week.  I will have to break the Nike’s in over time, but the UA shoes right out of the box fit like a glove and I ran with them.  Felt great!

The last bit of gear was something I was WAYYYYYY behind on.  Bluetooth.  While I work in the tech field, I’ve had nothing but terrible experiences with Bluetooth ear pieces.  Maybe I just don’t get it, but nothing ever seems to stay on my ear.  I bought something for like $15 which is a blue tooth wireless headphones and microphone – so I can answer calls when I’m biking and my wife calls me 13 times in a row.

Also, I have to cross the street in a few places when biking, and the wire to my headphones from my shorts…just not pretty.  It’s also like they all decided to make earphone cables 2″ shorter than before, because every time I get a new pair of headphones, there’s sometimes a tension between my phone in my shorts and my ear.  It might pull the earphone out.  I also ordered an arm band for like $10 – I have no idea if it’s going to fit.  It’s worth a try to see if I can go wireless AND not have my phone in my pocket.  This will present an issue when running.  While I have a treadmill in my house, the last time I went running outside with music I had one of those little ipod minis which I’ve had for like 9 years as a gift from my wife.  My iPhone 5 and now 6s are too big and bulky for running in a pocket, but on an arm?  Could be interesting!

With this, here’s a few pics I took out and about enjoying this beautiful fall weather this past week while exercising…