The site for the man with many interests

I never ate oatmeal until I was 39.  Let that sink in.

After I watched the movie “Forks over Knives”, I watched another one featuring the son of one of the stars making vegan food for others.  At first glance, vegan is some sort of left wing uber hippy plan to destroy your life.  I’ve found that somedays now I just want a meatless Monday or the like to lighten my intake of meats.  I’m not going to get into the movie too much, but the biggest takeaway is:

The movie is a little light with some of their evidence regarding meat and cancer growth, but I overlook the lack of scientific proof on this concept to defer to the larger concept: that there is a strong correlation between all of the meat intake and heart disease/cancer….and…how one of the doctors in the movie has been able to reverse heart disease via diet only.  The diet only portion of this was attractive to me to explore….and since I saw that movie, I eat far more less meat than I used to and eat a lot more veggies.  I’m not there yet, but I’m getting there.

Once of the biggest changes for me for all of 2015 was eliminating my two artery clogging breakfast sandwiches daily and replacing them and their 800 calories for a bowl of oatmeal and fruit.  I’ve stayed away from fruit for breakfast for many years because of the experience of spiking the blood sugar than be starving by 10AM and getting a special level of hangry by 11AM.

I never ate oatmeal before my movie adventures above, so I can credit the movie with helping me eat more healthy.  Here’s a rundown of what I do:

Prep all the fruits (this is extreme below, I usually do banana + 1 now) 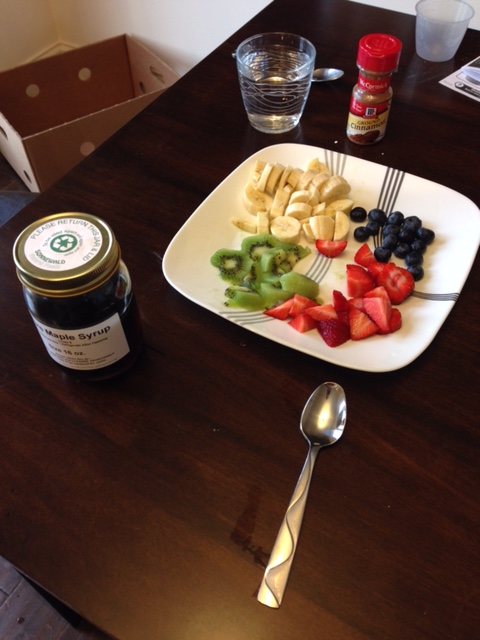 Make the oatmeal in the microwave.  I get the rolled oats at a local natural food store.  I don’t do the quick oats, which essentially look like goo.  I put .75 cup of rolled oats in with close to 1.5 cups of water and then microwave for 2 mins and stir, then maybe another 2 minutes.  I add a pinch of salt to this prior to cooking.

After it comes out, I originally used maple syrup for some sweetness (pictured above), but my step dad pointed me to honey…yes…I’ve never really done honey before.  The honey was indeed better….add some cinnamon, fire in the fruit, and off you go!

Below I just have banana, honey, and cinnamon for the days I was out of other stuff.  Some of what I add?  Blackberries, blueberries, strawberries, bananas, kiwi….I even just do cinnamon and raisins when I have no fresh fruit on hand.  So you can get yourself a pile of raisins to use as emergency backup, but the problem is they are very high in calories, so beware.