What can happen to silver in the next 13 days? Also – look at the BIG names backing gold and silver now!! 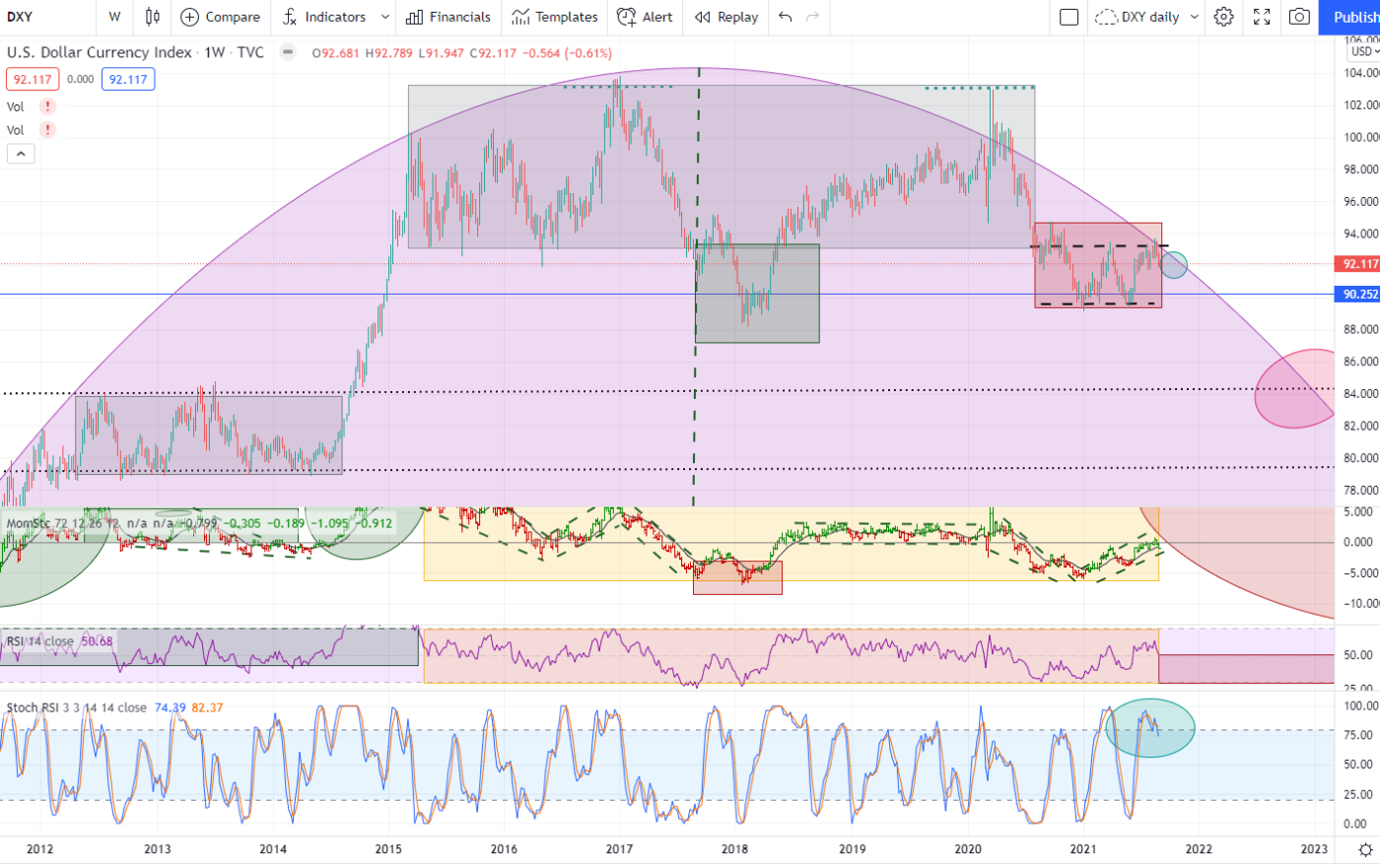 Look, anyone telling you they KNOW where this is going is full of shit. We look at probabilities, history, supply/demand, global politics, the dollar, interest rates, debt – and we all try and make our best long term guesses. Most reading this probably have mad stacks of silver or gold already, but this then begs the question about the short term?

I picked 13 days because I have noticed a pattern where the silver “beat down” starts around the 18th-20th ahead of silver futures expiration. I’ve shared the charts out on Twitter and on here a few times, but today is the 5th – so what can happen between now and the 18th?

To review, here’s the silver “beat down” chart…

Then, after the silver futures expiration, there seems to be a recovery period of 9-10 days. This is what it looks like.

Now, if you look at that LAST recovery green area, this chart was from a few weeks ago. I put down the hammer on some options and bought. And this happened.

Silver met my first target, which I felt would be stopped perhaps by the channel top or the 50dma. It touched the 50dma and then mysteriously stopped at the channel high.

Gold did also roughly what was expected, and touched the short term resistance levels – which also are a fib level.

You are now at a crossroads….

So where does that leave us the next 2 weeks? Look at the top of my green ellipse. It’s up there with the 100 and 200dma. But take a closer look and it’s around the $26 mark. If you look REALLY close at the gold chart, the $1865 is around the top green line of the larger triangle going on.

My thoughts are we will see an RSI around 70 before you start to see this daily cycle end. Going into this holiday weekend, a strong green candle was seen.

What this is telling me is that if we do NOT get some crime overnight on the holiday weekend to smash metals, we may see a decent week this week in metals. It’s possible we get the last $1.30 we need in silver to close over $26 and very possible we get over $1865 in gold. IF a smash down happens, we could see that final low that many talk about. This likelihood just seems less and less.

Take a look at the DXY. I stole the arc idea from Kevin Wadsworth on this, but my arc is much deeper than his was. What I see on this is the DXY heading down, and perhaps rapidly.

A few things about this DXY chart…

When I looked into arcs, I noticed some patterns with momentum. This is inversed, but you can see in the middle with the MomStc that on the way up, momentum stays above zero mostly. In the middle is a lot of chop. I believe we are about to enter that red area where you have a lot of downward momentum. Looking at the next level down on the charts, when I looked at arcs, you can see that the RSI on this inverted one mostly stayed at 50-70 RSI. In the middle is chop – these are great to trade from 30-70 RSI. However, with this arc heading down, the RSI I believe will dip below 50 on the weekly chart here and then for years trade between 30-50, with the occasional peak above 50. Lastly, the stochastic is high, to me this is signaling the ocean tide is going out now and this will result in lower DXY.

To match this, you see global headlines with what happened with the Afghanistan withdraw. You see China setting up a new futures exchange. You then see companies now looking to pay for fuel in Yuan or Rubles – when this was all dollars. Saudis are now making deals with the Russians. The petro-dollar is dying.

At the exact same time, you see us printing money to infinity and dilution of the currency is now being seen with higher prices. To compound this, as the DXY falls, imports will cost more – further creating price inflation felt to the consumer.

This has led some to believe the inflation we have seen is a mirage, because this will simply stop the purchasing of goods because they cost too much. Problem solved. I think in the moment they weren’t realizing that price inflation was due to more money in the system and this means there’s more money to compete for a finite amount of goods and services. Meaning – while you may not be able to afford that product anymore, those who have the imbalance of money to the upside DO have the money to buy those products – outbidding you. If price inflation were to just stop purchases and crush sales to then force manufacturers to lower prices, we would not have seen this in the 1970s. simply put, the high prices in 1970 would have reverted prices lower by pricing out consumers. That’s not how inflation works when you have 40% of all M2 money in the history of the US dollar created in the last year. Some say 25%. Point is, higher prices are a direct result of more money in the system.

Anyway, I see the DXY heading into a tailspin in the next few months. Could there be a 10-20% correction with the stock market and shoot metals down to lows again? Sure. Can’t dismiss that. Margin calls could hit all of them before the bell rings at 9:30 and we could be down 25% by the time we sign in.

I think THIS week, we may have metals move higher. But we cannot rule out a 2AM smash down. Tread carefully.

Big names in gold and silver!

I am on Twitter way too much and I have a lot of people there I love to interact with that I have never met in real life, nor are they on YouTube. I think I will have a post about who I follow down the road, and many of you will find your names on there, but one guy I followed early on in my Twitter life (I only joined Twitter in January I think). posted this recently….

After this, I saw how James Anderson on his weekly videos tweeted about John Paulson with bets of 25-50x on gold. I re-tweeted, then got a reply from James!! Made my week 🙂

The point here is that while many of us can stare at charts and build the macro case, take a look where big money is starting to move. They aren’t talking a talk – they are putting billions into this. At the EXACT same time, there is a “fear play” incoming with the DXY. Don Durrett is very much convinced gold needs a fear trade to move up. While it may be true, I don’t think it’s NEEDED. Is it nice to have? Yeah. I pointed out 2001-2008 how gold moved with the stock market, and I kinda sorta forgot about the dot com bust and 9/11 that would play into the fear trade in 2001. But 2004? Not sure the fear trade was there.

What you see now is real rates continuing to get more negative with most BIG money in the stock market now convinced inflation is transitory. As the jobs numbers sucked, and as retail is getting thumping, and investors realizing they are investing in companies with a 100P/E ratio (Tesla was 1100x the last time I checked), it’s very possible that investors start to get nervous just as gold hits $1865 and silver hits $26.

With the 9/11 anniversary coming up, potentially thousands of hostages in Afghanistan, Russia and China moving away from the dollar….it’s very possible that the fear trade Don talks about can really come into play. As inflation becomes “sticky” and stays north of 4-5% (next numbers are Sept 14th, so mark your calendar), you can see things start to move.

I’m cautious this week and will get out of most short term call options by 9/13 ahead of the 14th CPI numbers. I’ll buy back some ST call options the day after futures options expiration and ride up the next recovery.

I use this method for betting grocery money each month, no crazy amounts. Cashed in nicely on Friday, and I’m eating a lot of steak and getting a bottle of Johnny Walker Blue for a trip in a few days with the guys.

P.S. In case you missed it, I had some fun installing Michael Oliver as my president in a lighter piece yesterday where our entire government stepped down and I installed all of our gold and silver YT personalities in the government.

One thought on “What can happen to silver in the next 13 days? Also – look at the BIG names backing gold and silver now!!”