Is there more pain in the stock market coming? What can you do to protect yourself? What am I doing?

That would be my shortest post yet if I left it at that.

What I want to do is review each of them, briefly, and see what, if any parallels there are to today.

I cut off the years down below, but what you will see is over a 3 year period, it seems we lost about a third of our stock market.  While the boom happened, this is also in the backdrop of the 9/11 attacks.

This was a rather sustained contraction.  One sector (IT) was ballooned up with everything having a .com name attracting tons of investment.  Not many people actually knew how to make money off of websites back in the day, believe it or not.

2008 – again, also cost me my job.  This time, I was out of work for 6 weeks, but had a severance from my old company that carried me through and for a period of time with my new job, I was getting double paid.  Learned lessons from 2001 that helped me insure my career, so to speak.  There are no guarantees in life, but I made moves to try and protect myself with what I did for a living.

With this crash, the housing sector had bubbled.  Again – you see a sustained contraction over many years.  Not a cliff dive in a week.  This took many years to get out from under, but one of the people I watch said that this was at the time everything broke.  Not now.  THEN.  The problem was, how we “fixed” it was to put a band aid on it rather than fix the root issue.  Apparently, today is a result of this. 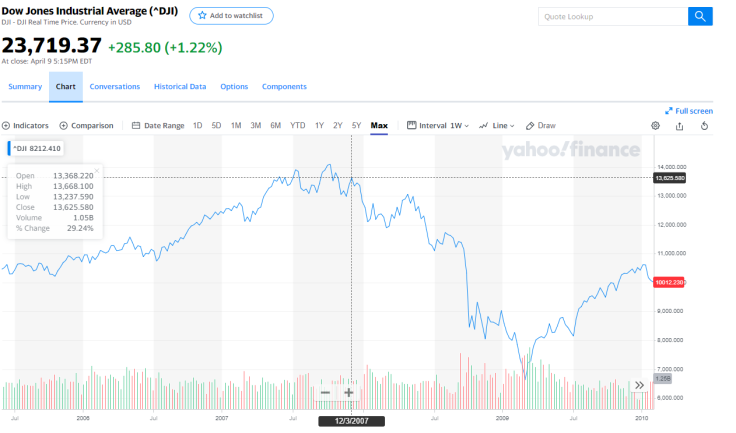 At the bottom of this, you start to see a V shaped recovery.  I believe this is with TARP and all kinds of federal programs meant to stimulate the economy.

1987 – before I was in the work place, but I believe a lot of this had to do with junk bonds.  This then led to a lot of problems with confidence in investing.  This was a STEEP drop.  Look at that cliff. 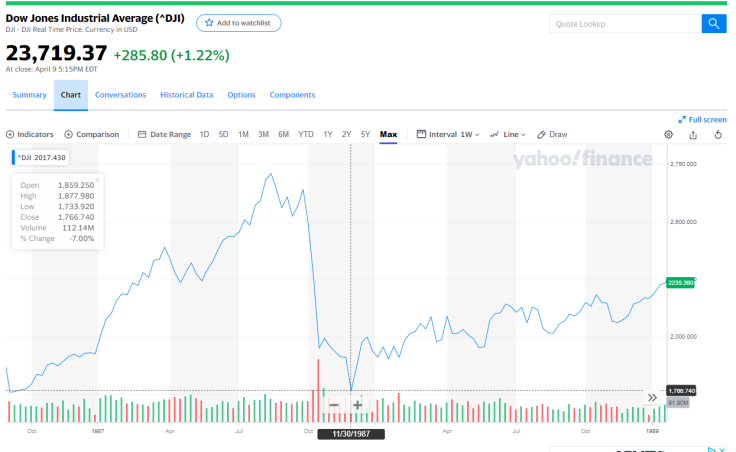 The recovery from the bottom had a V as well, with a slight pullback and then sustained growth.

1921 – I’m adding this because I only heard about it recently due to studies with the Spanish Flu versus coronavirus.  What happened here was somewhat similar to now, but how we closed up shop here – they didn’t do that.  They lost 50-100 million people worldwide.  You see many businesses failed and the stronger plodded on and then picked up their market share.

There was a double bottom here (more on that below) and then the roaring 20s took effect with lots of credit available.

1929 – This was the mother of them all.  The great depression.  The “everything” bubble. This had recovery and other recessions built in, but what took us from these ashes was Keynesian policies such as building roads, infrastructure, dams (power), etc.  The public works projects along with world war 2 helped us charge on.  All of my grandparents grew up in this, and this is where my “modest” background has roots in.  I like an Escalade like anyone else, but when I sniff danger in the stock market, I’m trained at birth to shop no frills at Pathmark and ratchet down my expenses.

Note the circle I put on this.  This is where some analysts think we are now.  I disagree.  I could be very wrong, but take a look. 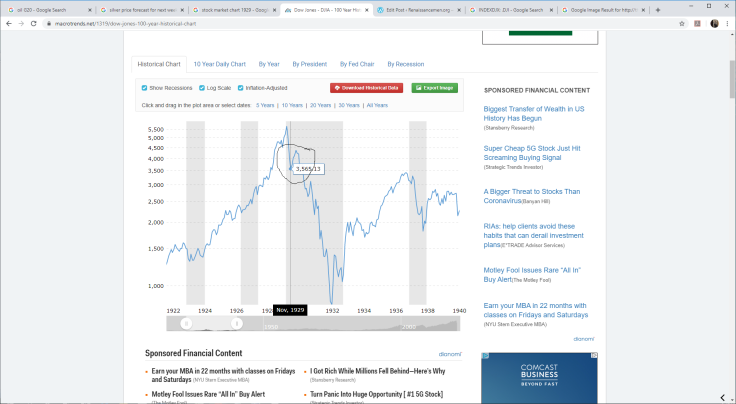 2020- this also is the “everything” bubble, and many people think this is the result of a lot of the fed actions in 2008/2009 by not letting certain companies fail.  Take a look at the circle here.  This is where many people see a parallel to 1929.  They feel we are nowhere near the bottom.  I agree – to an extent. 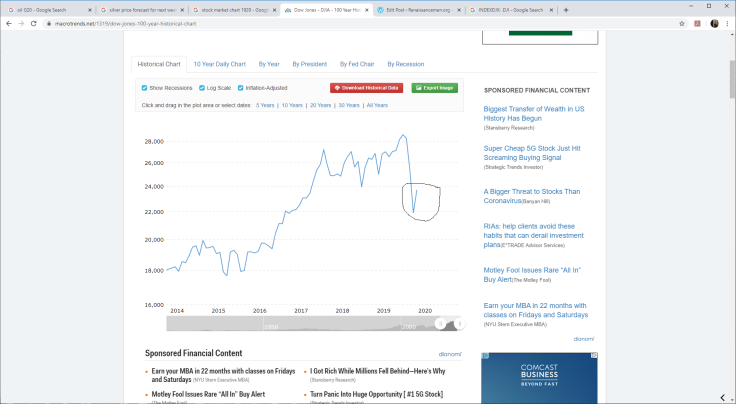 I wrote about the stock market being overbought several months before all of this shit happened.  Try my writing from December 30th.

The crash of 1929 was more organic.  Yes, it had the cliff drop.  Then a recovery, then everything dropped out of it.  I’d say the BIG difference between then and now is that we have safety nets to help prevent that second cliff drop that is steeper.  Think about the lessons from the previous crashes??

1921 – strength of businesses during a pandemic.  However, the root causes could be similar with businesses failing due to lack of customers.  The major difference here is people stayed away for years, this could be 1-2 months.  Lesson here is that mom and pop stores today that were over-leveraged and barely making it may fail.  Other stores with stronger business models, more cash to sustain a rough time, and better books will take their market shares.  Delivery companies like uber eats, Amazon, grub hub, Peapod, might take some of that market share as well.  Meaning- I believe the demand is there and the velocity of currency is there – it just may be re-directed from some dine in experiences to delivery of restaurant food and supplies.  Unlike 1929, the massive loss of jobs you see here may be extremely, extremely temporary.  4-8 weeks in most cases.  Certain professions like waitresses and bartenders may hurt – but places like uber eats, grocery stores and logistics are hiring.  So while some jobs may disappear, others are picking up that demand.

1929 – social programs.  The wheels fell off of everything in 1929.  There was no social security, welfare, or anything like that.  Today, many people lost their jobs, albeit temporary.  But – in 1929, the velocity of currency STOPPED.  All currency was gold-backed, so the fed couldn’t just print currency.  This was one reason they temporarily went off of the gold standard in 1931.  By devising these safety net programs and eventually going off of the gold standard entirely, a nation could put currency into the hands of those that needed it – which, using Keynesian economics – allowed the velocity of currency to continue.  Where 1929 had a cliff drop and recovery followed by another cliff drop – I feel that today we had a steeper cliff drop from 29,000 to 19,000 (about 1/3) that more mimics the 1987 drop.  That being said – we are in a mild recovery now and I keep hearing that we haven’t seen a bottom yet.

Well, I believe all of the social programs will prevent the sharp decline we saw in the second cliff drop down to 1932.  But – I feel there could be a drop to 20 or even 15k yet.  Why?  Because you have entire businesses that have increasing stocks at the moment and no sales in the second quarter.  Can we get people back to work by mid may?  Perhaps.  Even if we do, what kind of bust may hit with second quarter numbers?  The question is – did this cliff already have that baked into it, or will there be a second dip for the second quarter numbers?

This is where I want you to look back up at the 1921 depression.  This was short lived, but look at the double bottom.  I feel that is what we might be seeing upcoming and NOT the 1932 2 year arch downward.

1987 – investor confidence.  I believe a lot of laws came from this to protect the consumer.  The 1987 cliff drop had the V shaped recovery and then a little pull back before a sustained growth.  I see more parallels with this and 1921 than 1929.  There was no FDIC in 1929 and bank runs could decimate a bank in a day.  Today, we have protections for consumers.  Maybe not the best, but much better than 1929.

2001- our first real taste at a bubble pop.  Lots of credit thrown at the dot coms.  This is also the beginning of the mortgage crisis, as lots of credit began flowing towards those not qualified for loans.

2008 – our first REALLY big bubble pop, founded on the backs of a shady mortgage industry who let credit fly to anyone.  “The big short” captures a lot of this.  One thing of interest was things like Ninja loans (no income, no job).  From this, we did let some banks fail, but also learned how to help “save” companies “too big” to fail using federal monies to help them out of a crisis, yet get paid back with interest.  More rules came into play with regards to leverage.  Programs were spun up to help the velocity of currency help move industries forward (like cash for clunkers) to help the automotive industries.  The one big failure from this – which I think will be different in this one, is we did not let unhealthy companies die a proper death.

2020 – This is the “everything bubble 6.0”.  This has a fun mix of inflated mortgage prices, too much student loan debt, too much corporate debt, too much consumer debt.  While some people are predicting the great depression 2.0, I think COVID did us a service, believe it or not.  Instead of many companies failing over the next 2-4 years in a slow spiral of death, many companies that were unhealthy will indeed fail.  Many companies that had too much leverage from too much expansion may collapse.  But just 2 months ago we were at 29,000 on the stock market.

I feel there will be a short term recovery as the stimulus is helping keep the velocity of currency going.  When people get back to work, unemployment numbers will drop.  There will be a boost to consumer confidence and this could take the stock market back up to 26,000.

But metals are continuing to climb.  This is not a good sign if you like the stock market.

When the second quarter numbers come out, there will be a second bottom, I believe.  This might be 20k.  It might be 15k.  There will be some further deflation in stocks.  All stocks.  One of my babies now is Kohl’s.  Stock is moving up.  But how will 2nd quarter numbers fare when there are no sales?  Deflation.  But in 1 year, it could be back up to 30-40.  That’s why I’d say options could be a trap now if you don’t get out of them by mid to late May.

Once we hit the bottom the second time…this might be where you start to see weaker companies completely go by the wayside.  Maybe a KMart or Sears if they aren’t dead already die a quick death.  But it doesn’t mean those jobs are all gone.  Places like Target and Walmart may pick up that market share and hire more people.  This is where I think the great depression talk is not productive.  Velocity of currency is not stopping.

But from here is where you then start thinking about inflation.  At this point, you will have seen the double bottom.  However, you may also now be 30 trillion in debt and interest rates at virtually zero everywhere to get people to spend.  Spend more.  Buy more TVs.  As a result of all of this currency being thrown into the market, there will be an inflation like we haven’t seen in a long time.  Prices will go up.  I think we will buy less from China and that also will make prices go up.

If they haven’t already, the metals will be sky high.

Take a look at my recent read on how to get involved in the metals.

One thought on “Is there more pain in the stock market coming? What can you do to protect yourself? What am I doing?”